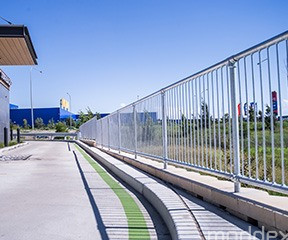 When you need to mitigate or eliminate risk to workers, customers and visitors from falls from height in public areas, why not consider Moddex Conectabal commercial balustrades?

And because our systems are modular, Conectabal can form part of a cohesive solution as they’re designed to integrate easily with our Tuffrail® and Assistrail® ranges.

Moddex commercial and industrial balustrades offer a high safety load rating and will achieve compliance with every standard in any application.

With nine configurations available in the Conectabal family (including the popular Wave), Moddex commercial and industrial balustrades are suitable for:

Select an option below to learn more about this product.

Standard mounts to configure these products.

To save you some time, we’ve included an extract from the National Construction Code 2014 for Australia so you can see at a glance what is required to keep people safe in public areas. Conectabal commercial balustrades are also compliant with the New Zealand Building Code.

(a) A continuous balustrade or other barrier, except for a barrier provided to an openable window covered by D2.24, must be provided along the side of any roof to which public access is provided, any stairway or ramp, any floor, corridor, hallway, balcony, deck, veranda, mezzanine, access bridge or the like and along the side of any delineated path of access to a building, if—

ii it is not bounded by a wall; and

iii its level above the surface beneath, is more than 1 m.

(h) Openings in a balustrade or other barrier must be constructed in accordance with the following:

(A) any opening does not permit a 125 mm sphere to pass through it and for stairs, the opening is measured above the nosing line of the stair treads; and

(B) for floors more than 4 m above the surface beneath, any horizontal or near horizontal elements between 150 mm and 760 mm above the floor must not facilitate climbing

Barriers, including parapets, balustrades and railings, together with members and connections that provide structural support, shall be designed to sustain the imposed actions given in Table 3.3. The top edge or handrail shall also be designed for the case where a concentrated load of 0.6 kN, positioned for the worst effect, acts inward, outward or downward. 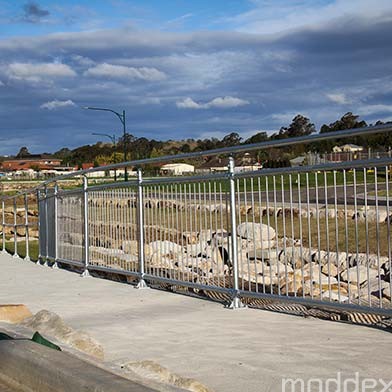 The Connectabal range can be customised with Assistrail and Tuffrail , whilst ensuring compliance with Australian and New Zealand Standards.

View projects where this custom combination has been installed:

Find out more about our customisation options. Get in touch with our expert team, call us on 1800 663 339 (Australia) or 0800 663 339 (New Zealand) or download our product brochure. We’re here to help, whether you need a quote, technical advice or tender support.

Select an option below to learn more about this product.